For years I have studied my skin in the unforgiving 8X magnifying mirror and dreamed of eliminating all the flaws. So when I read a magazine editor’s account of doing just that with a doctor who was my son’s boyhood friend, I thought it was a sign from the cosmos! Being only a short train ride from New York, I took myself to the office of Dr. Robert Anolik (Robbie to me) for a consult. We decided that the best course was a Fraxel Dual Restore laser treatment for resurfacing, softening lines and wrinkles and evening tone. The Vbeam laser would address my broken capillaries.

I looked forward to this treatment like you might an invitation to a major red carpet event, hopeful to shave off a few years and a lot of accumulated detritus. Here is the blow by blow:

Arrived at the doctor’s office and was photographed for “before” pictures. Consulted with Dr. R about the procedures and after care. I was first given the Vbeam laser treatment which was not uncomfortable except in and around my nose. Then the nurse applied a thick coating of numbing gel to my entire face and eye lids. After an hour I could barely feel my nose and mouth. Next Dr. R. demonstrated what one pass felt like, a mild sting and flash of light, before making grid like passes over my face and lids. After, the gel was removed and I could wash my face. In the mirror I looked mildly pink. Ice was applied several times. Then I was coated with sunscreen and out the door. Start to finish, it took about 2 ½ hours.

Once home, my face felt tight, drawn and slightly burned. I looked as if I had spent the morning in a tanning booth. That night, I washed gently and applied a heavy moisturizer.

By the next morning, I was red and swollen, as if I’d had a close encounter with a blast furnace. I wiped my face gently with a cool wet cloth, no soap, and applied moisturizer to my face and cream under my eyes. I had planned to spend the bulk of the week in California so my husband wouldn’t have to be subjected to the worst of it. So I iced on the way to the airport and applied more moisturizer on the plane. My face felt hot and a little rough. By evening I was bronzed and rough as fine grit sand paper. Faint grid lines appeared as well as an assortment of spots, red and brown. After a gentle wash, I slathered on Aquaphor. Now I gleamed like patent leather.

Still tight and brown and sporting grid marks. I was ready to shed this self induced, irritated skin. Peeling was starting around the chin area. 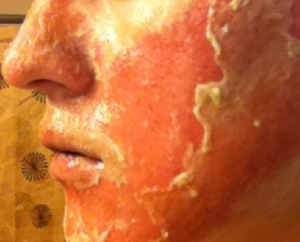 Still feeling like a stretched canvas and stinging slightly. The molting started in earnest but the good news was that Dr. R had designated this as Clarisonic Day. I could use my genius little whirling brush to whisk away some of the scum on my face. This process was taking longer than I’d hoped. But then I am the queen of unrealistic expectations.

Now I looked truly shitty. Half pink baby skin, half brown flaky lizard. I looked like I might have some horrific and contagious condition that would repel people if I went public. Restraint was needed to keep from scrubbing or peeling off the wreakage. I was slathering on Aquaphor at bedtime to keep things moist and loosen the dead skin, then blotting the goop so I wouldn’t slide out of bed. All the while I was dreading seeing my husband the next day and feeling not really ready for my closeup, Mr. DeMille. Looks like a week to ten day project.

Another day, another airplane. I decided to make a little effort and mixed some moisturizer with my BB cream which did a creditable job of masking the damage. I arrived late and in the dark so hubby couldn’t really see my condition.

Out with the old, in with the new. The shedding process that started in the center of my face progressed outward so I now had mostly pink skin framed by a flaking brown border which lessened daily.  When it was over, I obsessively protected my new “virgin” skin with SPF 50 and a big hat.

The laser treatment eliminated years of damage. Lines were softened, dark spots faded, scars less noticeable and my face was smooth as silk and radiant.

To realize the full potential of laser resurfacing, you should have a series of 4 treatments at 1 month intervals. I didn’t have the patience for that much downtime nor the money (approximately $1,000 per treatment) to fund it. But if you do, and can deal with the interim horror show, you should expect considerable improvement.

A promising alternative:  the Tria Age Defying laser ($495; www.triabeauty.com ) for home use. Just cleared by the FDA, it is the first non-ablative laser for personal use. Since it is less powerful than the one a practitioner uses, expect to give yourself a treatment five nights per week for 3 months. According to Dr. Zakia Rahan of Stanford (and a consulting dermatologist on Tria clinical studies), the results will  equal two in-office treatments.

At a fraction of the price!

3 Responses to Resurface me!