Nothing has quite the impact on overall beauty as good skin.

I was never blessed with this and am now paying the price (literally!) As a young teen I constantly battled acne. It followed me to college and into adulthood. Even while other pregnant friends got “the glow” that comes with being preggers, my erratic hormones betrayed me again. I finally got a handle on it when my teenage son and I went through Accutane therapy together when I was in my 40’s. Now, though I am fortunate to not have deep wrinkling due to my previously oily skin, I am left with the remnants: deep scarring around my mouth and chin where hormonal acne most often occurs.

A knowledgeable friend  referred me to Dr. Eric Schweiger in New York whose practice specializes, among other things, in acne and what it leaves behind. I had tried Fraxel laser (see previous blog Resurface Me) but it didn’t rid me of the scarring. Dr. S. suggested a treatment called CO2 laser, which he described as having the effect of 4 Fraxel treatments. The fractional CO2 laser drills tiny microscopic holes in the skin down past the epidermis and into the dermis. These columns of thermal injury stimulate new collagen to be generated, which creates rejuvenated smoother skin. His literature claims, “The Fractional CO2 can take years off of your appearance by stimulating collagen for tightening of the skin and smoothing of fine lines, eliminating unsightly discoloration from years of sun and improving the health of your skin.”

This is not an inexpensive procedure, most commonly costing around $4,000. Dr. S., however, offered me the proverbial deal you can’t refuse: he would do it for a more reasonable fee if I agreed to be videotaped and photographed for use on his website and office. Since I was planning to go public on my blog anyway, it was a win/win.

Before, in the doctor’s office

For those who wanted a documented Before and After, this one’s for you!

Laser déjà vu. First I had my before photos taken and a consult with the Dr. was recorded for posterity. Then a thick coating of Lidocaine cream was applied to my face and I gulped down a Valium to calm me during the hour it took to numb the skin. Once that was done, the zapping began and, I have to be honest, even with all  that topical anesthetic, it hurt like hell. I held myself together with deep breathing and asked for an occasional break. When he was done, two large iced gel packs were applied to my face which burned as if torched. He came back in and did a bit more tweaking of my crow’s feet and slapped on more ice. 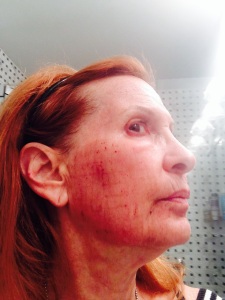 I was given a medication to ward off infection, slathered with Aquaphor and sent on my way. He would see me again in a week. I was told to expect noticeable results in 2 weeks and maximum improvement at 6 months. Once home, I iced some more and then went to our local pub for dinner, not looking too bad. In the dark!

By the next morning, all hell, so to speak, had broken loose on my face. Although it didn’t hurt, it had that tight feeling you get with a sunburn. I was  swollen all over but especially under my eyes, and my radiantly red face was crisscrossed with grid marks and dotted with pinpoints that had bled. My instructions were to wash twice daily with the mildest possible cleanser and follow with a glistening, viscous coat of Aquaphor for 3 days. Then I could switch to Bio-Cream, a post procedure cream, which would keep my skin moist without resembling an oil slick. 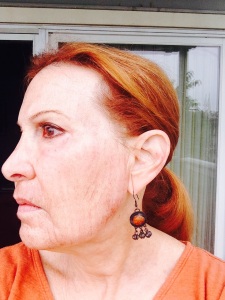 I’m tight and itchy today, very sunburn- like, and still sporting a grid. You could play tic tac toe on my face. Not that you’d want to. The most soothing course now is washing the goop off twice a day and starting from scratch.

To be continued next week……